The Treaty of Waitangi/Te Tiriti o Waitangi is a foundational document for New Zealand. Signed in 1840 by more than 540 rangatira and representatives of the British Crown, the Treaty set out an agreement between Māori and the European newcomers that remains central to this country’s cultural and political life.

Claudia Orange’s writing on the Treaty has contributed to New Zealanders’ understanding of this history for over thirty years. In this new edition of her popular illustrated history, Dr Orange brings the narrative of Te Tiriti/Treaty up to date, covering major developments in iwi claims and Treaty settlements – including the ‘personhood’ established for the Whanganui River and Te Urewera, applications for customary title in the foreshore and seabed, and critical matters of intellectual property, language and political partnership.

New Zealand’s commitment to the Treaty claims process has far-reaching implications for this country’s future, and this clear account provides readers with invaluable insights into an all-important history.

The Treaty of Waitangi by Claudia Orange was first published in 1987 to national acclaim, receiving the Goodman Fielder Wattie Award. This widely respected history has since advanced through several new editions. The Treaty of Waitangi/Te Tiriti o Waitangi: An Illustrated History is the third edition and the most comprehensive account yet, presented in full colour and drawing on Dr Orange’s recent research into the nine sheets of the Treaty and their signatories. 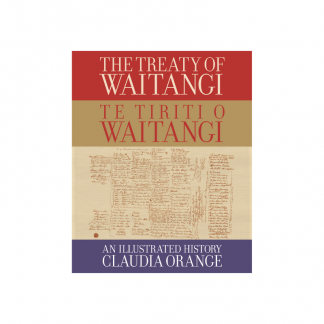 You're viewing: The Treaty of Waitangi Te Tiriti o Waitangi An Illustrated History $49.90
Add to cart