Pākehā Settlements in a Māori World offers a vivid account of early European experience in these islands, through material evidence offered by the archaeological record. As European exploration in the 1770s gave way to sealing, whaling and timber-felling, Pākehā visitors first became sojourners in small, remote camps, then settlers scattered around the coast. Over time, mission stations were established, alongside farms, businesses and industries, and eventually towns and government centres.

Through these decades a small but growing Pākehā population lived within and alongside a Māori world, often interacting closely. This phase drew to a close in the 1850s, as the numbers of Pākehā began to exceed the Māori population, and the wars of the 1860s brought brutal transformation to the emerging society and its economy.

Archaeologist Ian Smith tells the story of adaptation, change and continuity as two vastly different cultures learned to inhabit the same country. From the scant physical signs of first contact to the wealth of detail about daily life in established settlements, archaeological evidence amplifies the historical narrative.

Glimpses of a world in the midst of turbulent change abound in this richly illustrated book. As the visual narrative makes clear, archaeology brings history into the present, making the past visible in the landscape around us and enabling an understanding of complex histories in the places we inhabit. 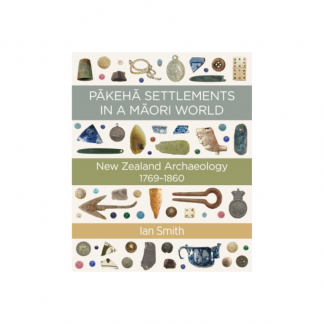