Bringing Back the Birdsong

Pioneer diver, naturalist, writer and photographer Wade Doak famously devoted his early decades to observing and recording New Zealand’s undersea life, with a few treasure wrecks along the way. He and his wife Jan have lived on the Tutukaka Coast in Northland for over four decades, making their home an 18-hectare patch of bush on a bend of the river. This new book from one of New Zealand’s true nature pioneers tells the story of how Wade broadened his focus from the sea to the land, and documents many of the discoveries he and his wife made during the years spent exploring ‘their slice’, from the offshore seabed up to the river valleys and forests.

With intensive control, the Doak’s have rid the area of major invasive pests and as a result the nature flora and fauna have begun to recover: “The natural world’, says Wade, ‘is reasserting itself. The same wonderland can be created anywhere in New Zealand once people choose to restore nature.’

Bringing Back the Birdsong combines the acute observational powers of two naturalists with their sheer love of the environment. Not just an engrossing and beautifully illustrated read, it is also an example to inspire us all.

Be the first to review “Bringing Back the Birdsong” Cancel reply 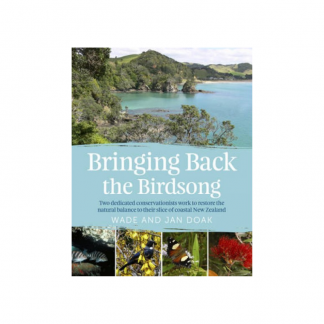 You're viewing: Bringing Back the Birdsong $49.90
Add to cart