For many a century the pre-contact Māori developed a sophisticated structure of beliefs and customs about the birds of this land, this Aotearoa, this New Zealand.  The basic myths and traditions came with the immigrants from legendary Hawaiki, the original homelands in the Pacific.  Changes the Māori made here to these legends were to give them relevance, to make make them understandable in the new-found natural world.  This is shown in the stories of Maui, the man-god hero who is known to islanders throughout the Eastern Pacific.  When Maui sought to slay the goddess of death, the Hinenuitepō, it was small local birds such as the fantail, the robin and the whitehead that he took along in his company.

Larger birds like the harrier (kahu) and the morepork (ruru) had other tasks in the Māori world, they acted as messengers to the gods in the heavens, winging their ways there along spiritual paths.  They were the mediums used by tohunga experts to communicate with the gods. Tohunga also applied their skills to practical methods of bird-catching. They read the signs in the sky, of the foliage, of the bird life.  They oversaw the manufacture and storage of the traps, lines and ladders used in hunting in the forests of Tāne.  They knew that Tāne was the power and origin of all tree, bird and even human life. They recited the proper chants to him and other gods so that the birds would be plentiful and the hunting successful.

The importance of birds in everyday life is clearly shown in the book. Their economic value for their flesh, feathers, oil, bones and skins.  Their abilities to be able to announce the seasons of the year, to predict weather changes, to speed success in love or war, to caution against breaking ritual protocols, and to take significant roles in birth and death ceremonies.

After contact time with the Europeans both the number of bird species and numbers of birds in each species in New Zealand dropped dramatically, some indeed becoming extinct.  In one fifty year period 28 of 70 indigenous bird species were lost, one third of them flightless and unique to this country.  Hence there are few, if any, experts alive today, who have had the opportunity of using the correct chants to lure members of individual bird species, or of employing the old methods of bird taking.

For this reason the wealth of information in this book has had to be pieced together from many manuscripts and books, a little gathered here, a little there. An instance where the shining “whole” is definitely greater than its parts. A rich compendium that tantalises because of what might have been, had more been recorded while still possible, and why this book is sub-titled “an introduction”. The bird illustrations by Keulemans of vanished birds like the huia and native thrush are also poignant reminders of what has been lost.

Be the first to review “Māori Bird Lore” Cancel reply 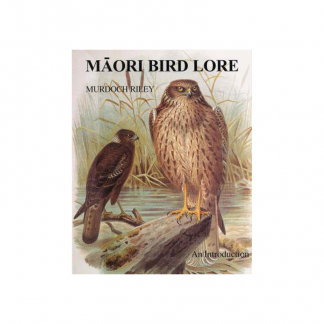