A landmark book about New Zealand’s marine reserves that connects readers to New Zealand waters. This important book, written by award-winning natural history writer Janet Hunt, examines New Zealand’s 38 marine reserves, and the need to protect and preserve our seas and foreshores in their natural state. Each chapter contains features about outstanding plants, birds, fish, mammals, invertebrates and crustaceans as well as interviews and items of interest about people associated with marine conservation-divers, underwater camera operators, marine biologists, Experiencing Marine Reserves (EMR) people, including young folks who have had recent marine encounters. From New Zealand’s most distant marine reserves (the Kermadecs and the Auckland Islands) to the Poor Knights, and from the five reserves of the Hauraki Marine Park to the ten reserves of Fiordland, this book also covers New Zealand’s marine animals and their unique environments. It’s a fascinating tale, with stories of conger eels prowl for sleeping fish, mass gatherings of fish, tropical turtles, the snatch-and-grab habits of gannets and much much more. Our Big Blue Backyard is based on a six-episode television series made by Natural History New Zealand and which is to be screened on TVNZ in late 2014 but it goes much further than the six episodes go. This entertaining, beautiful and engaging book about our little-known backyard oceans, the place where the world’s largest marine predators and weirdest fish live, covers a wide variety of life from the sub-tropical seas to the sub-Antarctic oceans. It makes a significant contribution to our understanding of the sometimes contested waters that surround us.

Be the first to review “Our Big Blue Backyard” Cancel reply 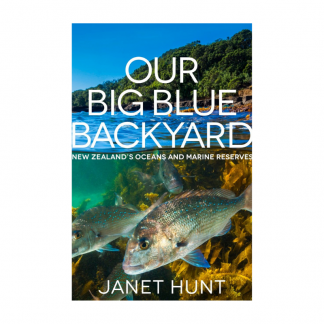