Science on Ice: Discovering the Secrets of Antarctica

In this lavishly illustrated book Meduna introduces us to an exhilarating landscape, to fascinating discoveries and to the people making them – those scientists tackling fundamental questions about life and the world around us from the frozen continent.

‘For some scientific questions, Antarctica is the best – and sometimes the only – place to look for answers. Visiting this frozen landscape is to gain a fresh perspective on our world, almost like going to another planet and looking back with renewed wonder on Earth.’

Meduna presents us with a fascinating frozen land – Antarctica’s ice cap holds three quarters of the planet’s fresh water, its layers of ice and sediment record past climate conditions going back millions of years, and the oceans around it drive the global food chain and a giant conveyor belt of currents that transports heat around the globe. The creatures that call Antarctica home have evolved to survive in conditions hostile to life, and the continent’s permanently ice-covered lakes may even hold the secret to how life began on Earth – and what it might look like elsewhere. And though it is the only continent without permanent human habitation, Antartica may yet hold the key to our survival.

In this lavishly illustrated book Meduna introduces us to an exhilarating landscape, to fascinating discoveries and to the people making them – those scientists tackling fundamental questions about life and the world around us from the frozen continent.

Veronika Meduna trained and worked as a scientist, working in the field of soil microbiology, before becoming a science journalist. A presenter and producer on Radio New Zealand’s Our Changing World programme, she has told hundreds of science stories, as well as writing for the New Zealand Listener, New Zealand Geographic and Te Ara The Encyclopedia of New Zealand. In 2006 she co-curated an exhibition for the National Library of New Zealand about the history of science in New Zealand, which was subsequently published as Atoms, Dinosaurs and DNA: 68 Great New Zealand Scientistsby Random House (2008), winning the Elsie Locke Award for non-fiction at the 2009 LIANZA awards.

Meduna’s work has earned her several awards and grants, including an appointment as Chevening David Low Fellow at Green College, Oxford University, in 2002. She lives in Wellington, but spent time visiting Antarctica in 2001 and 2006.

Be the first to review “Science on Ice: Discovering the Secrets of Antarctica” Cancel reply 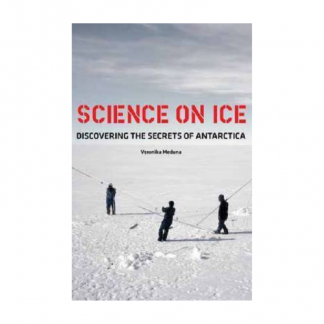 You're viewing: Science on Ice: Discovering the Secrets of Antarctica $59.90
Add to cart