Seabirds Beyond the Mountain Crest

Seabirds Beyond the Mountain Crest tells the fascinating story of New Zealand’s endemic Hutton’s shearwater, a species that breeds only at two remote locations, high in the Kaikoura Mountains. Amateur ornithologist Geoff Harrow is the person most closely associated with the story of Hutton’s shearwater, for it was Geoff who discovered the two remaining nesting sites in the 1960s. For five decades he visited the mountains whenever he could to observe and record the birds, and to encourage the Department of Conservation and its predecessors to take steps to conserve this endangered species.

As a result, scientist Richard Cuthbert was to spend three years living with 200,000 Hutton’s shearwaters and their neighbours, studying their behaviour, observing their interactions, measuring and recording facts and figures to build a detailed picture of why and how these birds had survived. The discoveries over time of Richard and his co-workers turned received wisdom on its head and revealed a whole new predator story.

Richard’s beautifully written, witty account – of the challenge and exasperation, the heartbreak and hardship, and the sheer joy of conservation fieldwork in a remote environment – is beautifully interwoven with other fascinating stories – of the ‘discovery’ of the species by nineteenth-century scientists and collectors, and Geoff Harrow’s discovery of the nesting grounds and subsequent long involvement with this species. Seabirds Beyond the Mountain Crest is a delightful and highly entertaining read. 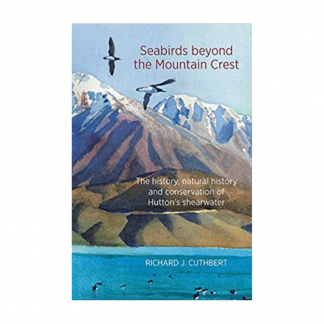 You're viewing: Seabirds Beyond the Mountain Crest $45.90
Add to cart