The Life of Jeanette Fitzsimons

Jeanette Fitzsimons was a visionary, a pioneer and a radical. This is the story of someone who battled National and Labour’s lock on parliament and had the courage to challenge political sacred cows. She was the co-leader of the Greet Party of Aotearoa New Zealand from 1995 to 2009, and a member of parliament from 1996 to 2010.

Highly regarded by all, she was the first, (and,until recently, the only) Green MP to win an electorate seat. She died very suddenly and unexpectedly in 2020. Fitzsimons is a unique figure in our political history yet someone whose personal story is still unknown.

How did a girl from a conservative rural family get to the front lines of radical political thought and then into the front benches of parliament?

How did she become the first Green MP in the world to win an electorate seat?

How did she survive the brutal world of politics and get through the death of her co-leader Ron Donald?

How did the world’s first national Green Party form in New Zealand, and what was Jeanette’s role?

What can we learn from her politics and what did she think of the Green Party that followed her? Fitzsimons lived a fascinating life, filled with moments of high political drama, and her example of how to navigate politics, adversity and triumph is more important than ever. 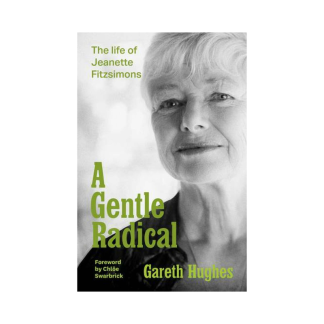