Fight for the Forests

The greatest success story of New Zealand’s modern environmental movement were the pivotal campaigns between 1970 and 2000 that stopped the destruction of our native forest.

They began with the battle to save Lake Manapōuri from being flooded, and by 2000, all the significant lowland forest in South Westland had become part of a World Heritage Area, the beech forests of the West Coast had largely been protected, and Paparoa National Park had been established. As well, the magnificent podocarp forests of Pureora and Whirinaki in the central North Island had been saved from the chainsaw, and many other smaller areas of forest had been included into the conservation estate.

Fight for the Forests tells this remarkable story, of how a group of young activists became aware of government plans to mill vast areas of West Coast beech forest and began campaigning to halt this. From small beginnings, a much larger movement grew, initially centred on the work of the Native Forests Action Council, and eventually Forest and Bird and Native Forest Action. These committed and extremely capable conservationists tapped into a widespread upwelling of public support and changed the course of environmental history in this country.

Mainly based on interviews with key players, author Paul Bensemann has recorded a largely untold but significant, inspiring history, one that reminds us that change for good is always possible.

Be the first to review “Fight for the Forests” Cancel reply 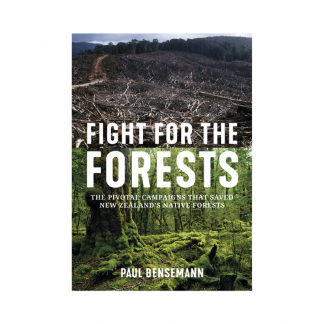