In Pursuit of Champions

‘For nearly three decades I have lived beside an estuary. Gleaming shell banks beneath vaulting sky, the clockwork pulse of tides and seasons, and vast muddy flats stocked with birds – these represent home. It is an attachment I cherish, a sense of place and fascination, continually renewed. But it was not always so. Like many New Zealanders, I was once quite unaware of the value of such places.’

So begins In Pursuit of Champions, the captivating story of Pūkorokoro Miranda Shorebird Centre.
For nearly 50 years, the Pūkorokoro Miranda Naturalists’ Trust has worked to inspire interest in our coastal wetlands and the biodiversity they support. Each year its Shorebird Centre at Pūkorokoro, on the Firth of Thames, attracts thousands of visitors.
Author Keith Woodley, as centre manager, has been involved in all aspects of the Trust and its work. In his absorbing and often moving book – part history, part memoir – he charts the life and times of this tiny but mighty voluntary organisation. It’s the story of how, driven by the importance of coastal conservation and that of its birdlife, a group of passionate and dedicated people built something from nothing, creating a globally recognised hub for shorebird protection and advocacy – all from an obscure rural corner of a little country at the bottom of the world.

‘Keith Woodley serve as a kind of Gandalf of the estuarine wonderland of the Miranda shorebird colony, an all-knowing birding wizard who is alert to its magic in this fresh and always fascinating history.’ – STEVE BRAUNIAS 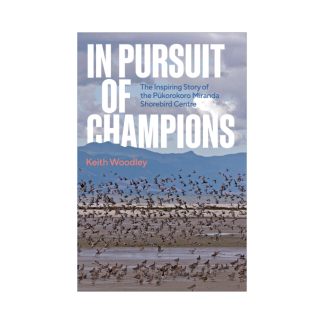 You're viewing: In Pursuit of Champions $40.00
Add to cart