New Zealand’s insects include some of the world’s most remarkable, including the giant weta (one of the world’s heaviest insects, dating from dinosaur days) and the world’s longest weevil. The most iconic, important and most prominent species and groups feature in Know Your New Zealand Insects & Spiders. Added to the natives are key introduced species, such as the monarch butterfly, and the book also features a selection of noteworthy spiders. This title joins New Holland’s hugely successful ‘Know Your’series, of which the first two titles ‘Birds and Trees’ have both reprinted twice within less than two years after their release. Written for a family readership and with the novice in mind, the text of ‘Know Your’ titles is light and easy in tone, with simple language, and is accompanied by half- or full-page, full-colour portrait photographs. This book is ideal for anyone interested in identifying the insects and spiders in their neighbourhood or in the wild. 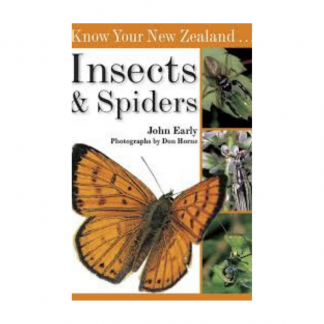 You're viewing: Know Your New Zealand Insects and Spiders $39.90
Add to cart