1080 and the fight to save New Zealand’s wildlife

New Zealand’s native wildlife is in crisis, withering under a relentless assault from rats, stoats, possums and other introduced pests. If we are to realise the vision of a predator-free New Zealand, we must defend our biodiversity more doggedly, across a broader front than we do now.

1080 poison remains one of the crucial tools in this fight. As pest control techniques have been honed, 1080 has prevented the loss of crucial remnant populations of native birds and other creatures. Yet it is condemned by vocal and passionate opponents. This book examines their arguments, and finds conclusively that the many claims made by 1080 opponents are plain wrong. 1080, the way it’s used today, does not kill more birds than it saves. Our forests are silent, not because pests are being controlled, but because they are out of control.

After more than 60 years of research into 1080, there remains no evidence that it persists in the human food chain, or causes cancer, or harms our waterways. Claims that 1080 could be replaced by trapping have confused two very different tools and ignore a number of glaring realities. In Protecting Paradise, Dave Hansford argues that it is time for New Zealanders to take a stand. No matter how unpalatable you find the idea of spreading poison through our forest, the choice is stark. Either we use 1080, or we watch more of our native wildlife vanish.

If you are confused by the many conflicting claims around 1080 – if you just want to get to the truth around one of the most critical environmental policy decisions we face – this book was written for you.

Be the first to review “Protecting Paradise” Cancel reply 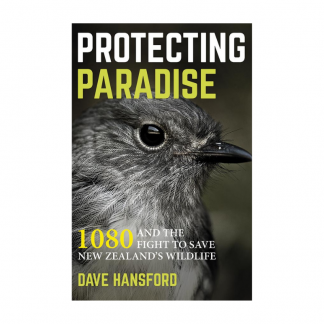